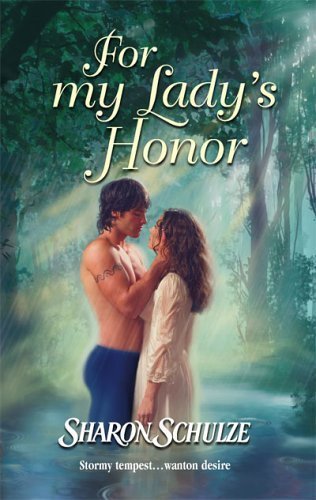 An excerpt from For My Lady's Honor--

Her senses alert, Alys heard water splashing. Following the sound, she hurried along the path until she reached a small pool surrounded by trees and rocks.
A pool occupied by a muscular, naked man.
He faced away from her, the water barely hiding his buttocks. Moisture shimmered on his tanned skin, accentuating his strong arms and back. He swept his hands through his wet hair, smoothing it back to lie, dark and wavy, to his shoulders.
She couldn’t mistake that hair. ’Twas Padrig.
Blessed Mary save her! She’d always thought him handsome, but she’d never imagined he looked like this.
Her mouth dry and her gaze intent upon Padrig, Alys stole closer to the edge of the pool. She’d no intention of bringing this mesmerizing scene to an end any time soon by catching his attention.
He stretched his arms over his head. The muscles in his back and shoulders flexed, drawing her attention to several dark, intricate designs on the smooth flesh of his shoulders and upper arms.
They appeared to be drawn upon his skin. She’d never seen such a thing—what could they be?
Padrig began to slowly walk away from her, toward the other side of the narrow pool. Startled from her fascination, Alys knew she should do something to make him aware of her presence, but instead she lingered at the edge of the forest, motionless and silent, to savor this unexpected pleasure for as long as possible.
Padrig’s lips curled in a smile as Alys continued to lurk near the water on the other side of the pond. Her startled gasp when she’d seen him would have given her away even if he hadn’t already heard her moving through the trees lining the path. He should have spoken, or shifted deeper into the water once he’d known she was there, but he couldn’t resist the provocation to tease her.
How far could he go, he wondered, before she’d do something to let him know she was there?
He stretched his arms skyward and took another step away from Alys and closer to the far edge of the pool. He had to fight the temptation to turn around, to see the expression on her face as she watched him. He could feel her eyes upon him, the intensity of her gaze nigh a physical caress over his flesh.
A caress that was causing an all-too-real reaction, he noted wryly. Mayhap he’d better move into deeper water after all; he didn’t need to have her run screaming back toward their campsite, sending her maid into a tizzy and his men scrambling to protect her.
But what if she didn’t react that way? For all he knew, she might even now be removing her own clothing to join him in the water . . . .
Closing his eyes for a moment against the yearning that image brought to mind, he reluctantly shifted his thoughts instead to Lord Rannulf’s reaction should Padrig take such base advantage of a young lady in his care.
Jesu, had lust unbalanced his mind? Lady Alys was a noblewoman—a virgin, he had no doubt.
If Lord Rannulf didn’t have his head for such insolence—or some other part of him a bit lower, he thought with a chuckle—the lady’s father would certainly take exception should Padrig attempt to steal her innocence.
Pah, as if Lady Alys would want the likes of him anyway!
Though her continued silence did make him wonder what she was about.
Unable to resist one last taunt, Padrig took a step back, until the water covered him to just above his hips, and turned.
“Can I help you with something, milady?” he asked evenly. ’Twas difficult to maintain a neutral air once he saw Alys, however. The mere sight of her sleep-tousled hair, combined with the way the soft fabric of her gown clung to her lissome form, sent his body into instant rebellion against his strength of will. The expression on her face—soft, curious, her gaze intense as it grazed over him—was impossible to ignore. Despite his attempt at restraint, he could not suppress an equally heated response.
He moved deeper into the water at once, lest he flaunt his reaction to her; he’d no wish to embarrass her or himself.
She wet her lips with her tongue and raised her hand to smooth down her dark chestnut hair, a tide of color tinting her cheeks. “Nay, sir,” she replied, her gaze meeting his with a hint of challenge, “I was simply curious. I wished to explore a bit before we resume our journey.”
“And was your curiosity satisfied, milady?” he asked.
Her lips curved into a faint smile. “Not yet, Sir Padrig.” She moved closer to the water’s edge. “Though I believe if I’m patient enough it will be.”

From the book For My Lady's Honor by Sharon Schulze
Harlequin® Historicals, March 2006, ISBN: 0-373-29394-1
Copyright © 2006 by Sharon M. Schulze
® and ™ are trademarks of the publisher
The edition published by arrangement with Harlequin Books S.A.
For more information surf to http://www.eHarlequin.com

Praise for For My Lady's Honor--

"FOR MY LADY’S HONOR is a delightful adventure full of romance and surprises . . . Alys proves she is clever and resilient. Padrig also shines as a true knight. . . I came away thoroughly satisfied and entertained without knowing anything about the previous six books. Although, now that I know what I have been missing, I plan to rectify the matter and acquaint myself with all the l’Eau Clair Chronicles."

"This is a well-crafted tale of how a girl became a woman at a time when women had no say over their own lives. Alys will risk everything to be with the man she loves and get her well-deserved happily ever after."

"This is a wonderful historical romance with strong characters and sensuous love scenes. The supporting characters are colorful and likeable also. The setting in the Middle Ages is very well drawn and the reader will have no problem picturing herself right there with Alys. This is the seventh book in a series, and I intend to read the rest."