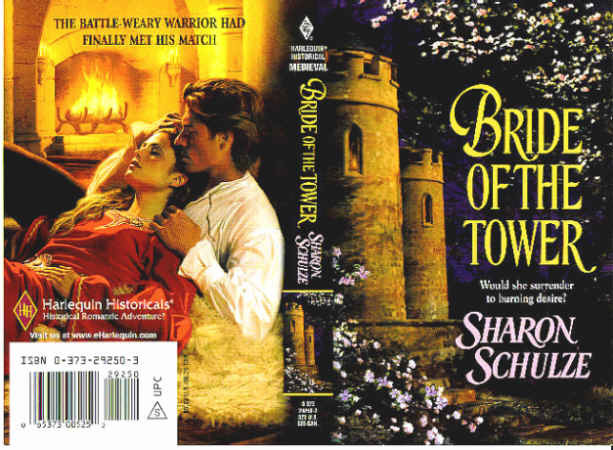 Copyright © 2003 by Harlequin Enterprises Limited® and ™ are trademarks of the publisher
This gorgeous 2-sided cover was a finalist in All About Romance's cover contest. The voting is in, and Bride of the Tower came in second!

An excerpt from Bride of the Tower--

"Hellfire, he's swooned," Lady Julianna d'Arcy grabbed hold of the fallen man's mail-clad arm--caught beneath him when he collapsed--and shifted it to rest at his side. Her touch gentle, she brushed his hair away from his brow with a frown. Blood welled under her fingers and ran down his face; more dark streaks of it oozed sluggishly from his neck and arm.
He clearly needed more help than she could give him here. She grabbed the hem of her surcoat and sliced away two strips of fabric with the long dagger lying beside him on the road. "Rolf, come help me bind his wounds, then you and Bart may move him."
Bart knelt on the far side of the victim and carefully raised the man so she could wind the material round his brow while Rolf tended to his throat. "Move him where, milady?" Bart asked.
She knotted the linen and used the end of it to blot away the worst of the blood besmirching the man's face. "Back to Tuck's Tower, of course." Clambering to her feet, she took up the dagger and thrust it into her boot top, next to her own.
"Bring a stranger within our walls, milady?" Bart protested as he rose.
"He's no danger to anyone in his present condition," Julianna pointed out tartly. By the saints, would he ever cease look upon her as a child? Her father had been gone for nigh on a year now, her mother slightly more, yet unlike most of her people, Bart continued to quietly challenge her authority to rule her lands, treating her instead as the cherished young lady of Tuck's Tower.
Something she'd never sought to be--and had certainly never been.
Rolf, waiting patiently near the injured man's head, motioned for Bart to help lift him, but her father's old retainer ignored him and moved closer to Julianna. "What of later, Lady Julianna?" he asked low-voiced. "Once he's healed? What will you do then, if he turns out to be dangerous?"
"You dare to question me, Bart--to question me here, now?" Though she kept her tone as restrained as Bart's, she made certain he could not mistake her displeasure. "Make no mistake, we shall discuss this later." Biting back a snarl of frustration, Julianna spun away and bent to grasp the victim's feet. She nodded to Rolf and they lifted the man. "Now is hardly the time,” she added. “At this point, the poor fool's more like to die here in the road."
Though 'twas a struggle for her--the fellow was tall and solidly built--she didn't permit herself so much as a grunt of discomfort as they carried him to her mount.
"I'll take him with me," she said, gratefully shifting her burden to a glowering Bart and climbing unassisted onto her mount.
It took three men, grumbling and complaining, to support the fellow and shift him into the saddle before her. Biting back a few curses of her own, Julianna fitted her arms about him to hold him more securely. His tall, lean body fit snug against her, his back to her front, making her all too aware of his muscled physique even through the layers of mail separating them.
She eased her hold a bit, making him groan and shift in her grasp and his empty scabbard bump against her leg. Tightening her hold again, she glanced about, hoping to catch a glimpse of his sword. If he survived, he'd not thank her for leaving the weapon behind in the forest.
And if he did not, 'twould be another blade to add to her own ever-dwindling arsenal. Though the thought made her feel like a grave robber, of late she'd reached the point where she could not afford to be too particular. As long as she wasn't forced to turn outlaw . . .
"Rolf, find his sword and anything else that looks like it belongs to him," she ordered. "His horse, as well, if it hasn't run off. God willing, he'll have need of them someday soon."
Wheeling her mount, she led her troop along the moon-shadowed trail, doing her best to ignore the intriguing feel of the man's weight pressing her into the saddle. She glanced down at the stranger's face, at the strength no amount of blood and bruising could hide.
And prayed she'd not have cause to regret this night's work.

From the book Bride of the Tower by Sharon Schulze
Harlequin® Historicals, March 2003, ISBN: 0-373-29250-3
Copyright © 2003 by Sharon M. Schulze
® and ™ are trademarks of the publisher
The edition published by arrangement with Harlequin Books S.A.
For more information surf to http://www.eHarlequin.com